Just like last week's quilts, this one had a long dormant period. I originally designed it as a wedding present for a friend getting married in December 2007 in the Bountiful Temple. I had a lot of free time at my part time receptionist job, so I passed the time by designing a snowflake that incorporated the temple and hearts. I thought this would make a good present since I had absolutely no money to buy anything. 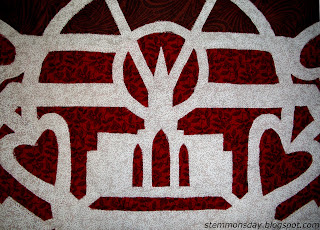 Cutting out the design took several steps. First I drew the whole thing on paper, then trimmed to a one sixth triangle section of the drawing. I cut that out and traced it onto a poster board for a template. Then I traced the template six times onto fusible webbing. Then I ironed the webbing onto the backside of white fabric and I cut the the whole thing out. The snowflake part of the design is all from one piece of fabric. I then cut out the orange-brown background, which is also one piece of fabric. I placed both the brown and the white pieces on the red, lined everything up and fused the different sections together with the webbing on the backside of the white fabric.

By this point I was getting a little tired of the whole thing and started to question if my friend would really want a decorative wall hanging. I decided to make her a snuggle quilt instead. (Snuggle quilts are too small for a twin, but big enough to snuggle under.) I had some red and green flannel in my stash so I made her a pieced flannel quilt. I thought it would be useful and not a burden, as art gifts sometimes are. The flannel quilt wasn't as intricate as the snowflake, so it was less of a burden on me too. ( Unfortunately I don't have a picture of the flannel quilt.)

The snowflake quilt stayed folded up and put away for years until I finally decided to finish it for myself this year. I added the green triangles to make it rectangle and hang able. Then I zigzag stitched over the whole snowflake. I quilted it with red thread and stitched around instead of over the snowflake. 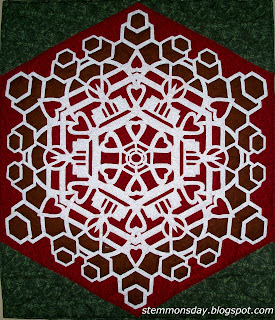 It can work as a Christmas quilt and a Valentine's Day quilt. It could work as an anniversary quilt too since Alan and I were married in the Bountiful temple just three weeks after Christmas.

Next time: love, snuggle quilts, and football.
Posted by Emily at 6:37 PM