The man I love, loves football. I mean really loves football. He fortunately doesn't love all football, just Brigham Young University football. I have learned a lot about the sport since we've been together. I just didn't care before, in fact I found it boring. Lets face it, the teams kick the ball, spend a few seconds running around, then stop reset, hike, spend a few seconds moving, stop reset, and so forth. All the stopping and starting always felt pointless and couldn't hold my attention long enough to catch my interest. Alan spent some time tutoring me on plays and terminology when I explained I didn't even know what a "down" was. I do understand more about football games now and can even watch a whole game without rolling my eyes. I still don't love watching televised games, but I really do enjoy attending live games with Alan. Fortunately Alan is well versed enough he can give me my own personalized running commentary (when he isn't yelling at the refs) where he explains what is happening on the field. ( I never can understand the announcers at live games, echo, echo, echo.)

When we were engaged, I didn't have any money to spend on a Christmas present for Alan. He really loves technology related gifts, but those all cost money. I had some blue fabric, but only scraps. I designed a quilt big enough to wrap around two people to keep warm at a football game. I didn't have a lot of free time either, since our engagement was all of two and a half months and Christmas was three weeks before our wedding. I managed to finish the quilt top in time to wrap for Christmas.

I didn't actually stitch the quilt with a batting and a back until the next November. I got a fancy Grace quilting frame (which I had never even seen anyone use before) with our tax refund. I assembled it myself, but I had a mental block on how to get a quilt on the frame so it sat there for six months before I finally enlisted Alan's help to get the thing started. I needed his help for about five minutes before it all clicked and I was able to proceed. The football quilt was the first to get stitched on my frame. 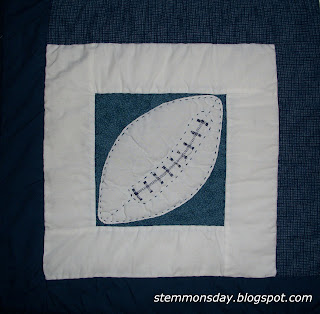 There are five different blue fabrics used on this quilt since I had to scrounge to find enough non girly fabric. the four large rectangles and the Y are a waffle knit, the light blue center is flannel, and the white is all from an old bed sheet. I used fusible webbing to place the lettering around the sides and football corner detail. I didn't use it on the Y, I just pinned it down and stitched around it old school style. I was able to afford new fabric by the time I got around to the quilting, so I bought a nice navy flannel for the back of the quilt. I quilted it with navy blue crochet thread. I thought of it as a compromise between tying the quilt with yarn and quilting with thread. I also thought the crochet thread might be easier to use than quilting thread. (It was actually quite difficult to pull through the fabric layers, but it made for an interesting look.) 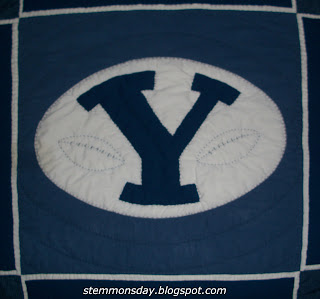 When I photographed the quilt it was already a couple years old and had been laundered multiple times. The colors are holding up well, but it does look slightly warped and pretty wrinkly. This is from mixing knits with woven fabrics and because the white fabric had been laundered so many times before use that it didn't shrink at all, where the other fabrics shrank a little ( and yes I did pre wash them this time.) 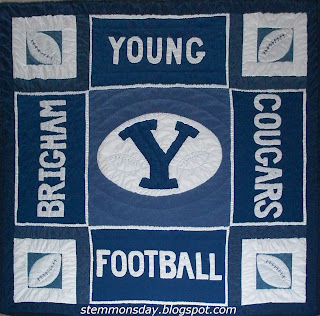 Next time: a snuggle flannel quilt of my own.
Posted by Emily at 10:46 AM