Goals and a Witch Doll

I've done a lot since my last post. Most of it wasn't really worth posting about and I got out of the habit but I have some new goals that I want to be accountable for so I'm going to start posting regularly. I have recently paid off my student loan,(Yea!) and quit my day job (Double Yea!) People ask me what I'm doing with myself and in order to not have to say, "you know, stuff", I have set myself a list of goals to accomplish every day.

I had the personal tragedy of a miscarriage back in the Spring and I stopped my exercise routine, my get-healthy diet and my crafting for the most part. I just spent my free time lying on the couch eating plain chocolate chips, or putting together puzzles that I would immediately tear apart once finished (I always do that with puzzles anyway, but it felt symbolic somehow at the time.) Basically I wasn't doing anything lasting. My hormones have seemed to settle down lately, I'm not crying all the time anymore. I started crafting as I started feeling better and I feel like I'm just about back to my old self now. I'm also back on the treadmill six days a week and back to watching what I eat and counting calories to try to get healthy. I've been going for about a week and a half and I haven't fallen off the wagon yet.

I also have the goal of writing three pages a day in longhand. This is an old habit that I dropped some time ago but it is helpful in draining the brain of all the garbage and leaving room for creative thought. I do this by writing as fast as I can without editing and having the freedom to write anything because no one is allowed to read it but me. This takes a lot of practice, it isn't natural to turn off the inner critic.

Anyway, my next goal is to draw a sketch everyday. preferably a good one, but it doesn't have to be professional or anything. This goal was inspired by the blog drawingsaudade.blogspot.com. She doesn't post regularly now since she has accomplished her goal of drawing and posting a sketch every day for a year. She was also doing this in the recovery of a personal tragedy. I'm mostly doing it so that all those skills I learned at school that I just finished paying for aren't lost through disuse. I can't promise to post everyday, but I will post my daily sketches at least once a week.

My last goal (at least for now) is to write on my book everyday. My brother, Don just wrote an awesome young adult novel and inspired me to get back to work on my young adult novel. I've worked on it off and on, (mostly off) for years. It's time to get going again and make it long enough and an interesting and well crafted novel.  I won't say much more about it until I've finished because it is much more impressive to say, I wrote a book, rather than I'm writing one.

In the midst of all these goals I'm also crafting and quilting. I've made a couple dolls in the last few months and I made two last year that never made it to the blog so I'll post them soon. So far all the dolls I've made are holiday decorations. I'll post them in the order of their respective holidays.

My first doll is my witch. She is about 13 1/2 inches tall and 16 inches tall with her hat. I modified a pattern I found on online here for the doll and had to make up a pattern for the dress and hat. Luckily I've made a dress or two in my time and had a general idea how to make a bodice. The skirt is a simple gathered skirt with a gathered piece of black lace over the top. 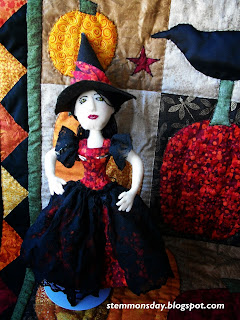 The hat is a cone made from a cereal box and lined with black felt, decorated with the last remnant of the dress fabric, (also the fabric of the the big pumpkin from my Two Crows quilt.) I'm wishing I had put more stuffing in her neck or at least used an armature for support since her hat is little too heavy and her head falls back a little, making her look like she is always looking up at the sky. I have to lean her against things for her look straight.You can't see her feet, but she is wearing black lace stockings and no shoes. The broom is made from a dowel. I rounded the tip using a pencil sharpener and sand paper and the bristles are from a smaller broom pen I found at Smith's in the Halloween section. 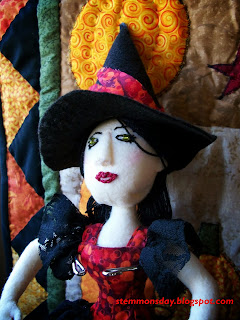 Her face is quite different from the pattern. The chin was too square for my taste so I dimpled the sides by stitching through the head with a long needle and securing the stitches at the top of her head before adding the hair, thus making her face a little more oval. I used black crochet thread for the hair and I embroidered the lashes, eyebrows and lips with embroidery floss and used green glass beads for eyes. They look a little funky, but that works for Halloween. I had started, wanting to make an ugly witch, but apparently I'm not capable of making anything deliberately ugly. I always want to pretty things up.

Coming soon: daily sketches and a Thanksgiving quilt.
Posted by Emily at 1:23 PM