Now days we think of witches as fictional workers of magic that can be bad or good, depending on the story. They usually look different than others and dress in a particular way.
Early Americans brought their European traditions of a physically present devil that looked like the pagan god Pan (horned, hooved and goaty) with them to America. that devil walked the earth tempting people to sell their souls. Witches were evil women or men that had sold their souls and worked magic to hurt others. Many women that were accused had had many children die in their families. (Losing children at a time when high childhood mortality was common wasn't enough, they had to suffer accusations as well.)
Witches supposedly looked like everyone else. 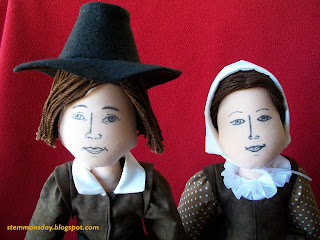 I've been messing about with  www.relativefinder.org. On it, I find how I'm related to historical and or famous individuals. The information is only as accurate as my family tree entered on www.familysearch.org. This website is free and in run by the Church of Jesus Christ of Latter-Day Saints. You don't have to be a member of the church to use it. A lot of info has been entered by millions of people so if you can enter just a few generations worth of your family tree you can usually find a link to more generations. Live people won't show up on the trees unless you enter them and then will only show on your own account as a security measure. Women are listed by their maiden names and that can either make them easier to find or harder, depending on the records.

On the Mayflower relatives I found a new ancestor that I hadn't found before. Francis Eaton who I'm related to on my dad's side. It also shows John Billington as an ancestor. There are several of my direct ancestors that are listed as 12th or 11th great uncles because Mayflower passengers are listed on familysearch so many times, that sometimes with variation in birth date and place of birth or death that relativefinder can't confirm an actual link to an event like the Mayflower. So it isn't a perfect system but it is interesting.

Anyway, it also has a list of my relatives that were a part of the Salem Witch Trials. Though this was an infamous event of hysteria and paranoia that historians and psychologists can't quite pin it down, there doesn't seem to be a single or easy explanation. Whatever the explanation, it was a situation that started small and got carried too far, people died, people's lives were destroyed. Most of the women accused had many children and their lives had to have been so painful with the stigma and poverty that came with it. The relatives I found are mostly distant cousins, only one was a direct ancestor. Each of the people have an interesting story. I don't have the time to include them all so I'll provide a link to their histories where I can find them.

I have relatives from the Salem Witch Trials on both sides of my family. There are less on the Rushton side so I'll start there.

Thomas Danforth 6th cousin 7 times removed. Justice of Superior Court of Judicature 1693. He was against the practices and spectral evidence allowed in the earlier trial. More here.

Mary Wolcott 2nd cousin 10 times removed. One of the "afflicted" girls that accused others and gave spectral evidence. More here.

So here I have relatives both accusers and accused and I can only consider the terrible strain everyone felt and hope I never get caught up in a witch hunt of any kind in my own life.

Susanah Sheldon 6th cousin 7 times removed. One of the "afflicted" girls that accused others and gave spectral evidence. More here.

Nathanial Saltonstall 7th cousin 8 times removed. Magistrate at trial but resigned over the nature of the trial. more here.


Next time: I'll actually show the wookie I made for my baby, I just thought it would be cuter next to my actual baby. So I'll wait a few more weeks until he's born to post that.
Posted by Emily at 3:50 PM