How to Make a Wookie from a Doll Pattern

This is a bit late. I meant to post this before the new Star Wars movie came out, but Star Wars doesn't go out of style so no worries.

Back before I found out if I was having a boy or a girl I decided to make a wookie doll. I knew it would be a hit either way. There weren't any wookie patterns, not that I liked or were for free anyway, so I made one. The trick is to modify an existing pattern. I used a doll pattern I had on hand. 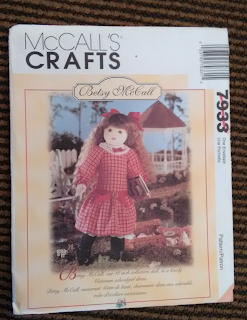 The pattern can be followed as is except for the head and torso. Chewie's long hair makes him look like he doesn't have a neck and maybe if you have a faux fur with long nap you wouldn't have to modify your pattern at all but I was using a furry fleece with a very short nap.

Tip: When using fabric with a nap, like fleece or fur, keep a big lint roller and a vacuum handy, and take your allergy pills before hand. 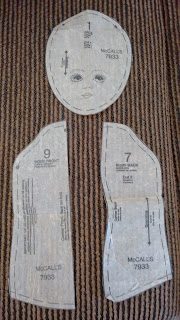 I placed the pieces over some junk mail for scrap paper. I folded the head in half and overlapped it over the torso to where the it would have been if the head were attached to the neck (approx.) I squared the top of the head a bit and cut straight down from the widest point of the head to the shoulder. I also widened the shoulders a little. (This is a full grown wookie, not a little girl.) The long straight line of the pattern piece is placed on the fold. Cut one. 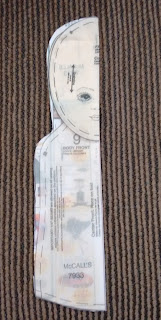 I did the same with the back. Cut two.

I followed the pattern instructions for the remainder of the doll, except for the arms. I didn't have any doll joints to have movable arms so I just stuffed and attached the arms to the sides before sewing the front to the back. 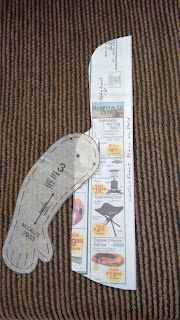 I used shoe button style eyes for the eyes and a size larger shoe button eye for the nose. The teeth are a bit of felt. 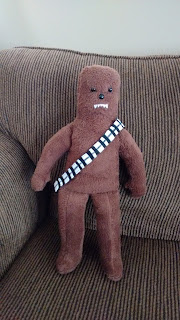 The bandolier (or as I like to think of it, "wookie-purse") is made of felt. 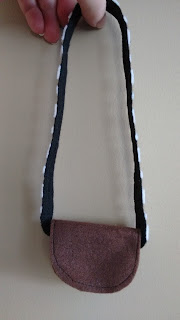 The strap is made of an 18 in. x 3/4 in. strip of black felt. I cut white pieces that are alternating 1/2 in. x 3/4 in. and 1/4 in. x 3/4 in. and placed them approx. 1/4 in. apart leaving about an inch on both ends with no white pieces. I pinned the white pieces down to the black piece and sewed a straight stitch down the length of  both sides. I then sewed a wide seam stitch of black thread down the center of the strip for the complete bandolier strap look. (Measurements are for an 18 in. Wookie.) 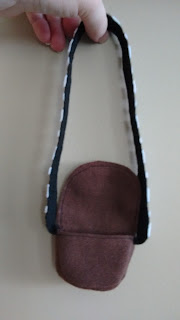 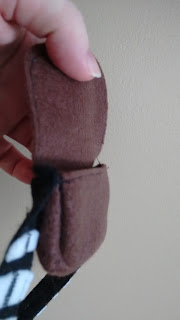 
Fun Fact:
The original Chewie costume was made of yak fur, and the current ones are made of synthetic fur but they wear out fast because no one can resist hugging a wookie.

My little guy is still too small to care about most of his toys but we played with it a bit for a photo shoot on his first day home from the hospital.