When All the Morning Stars Sang Together Quilt

This was my first really ambitious quilt. I mean ambitious in size and in the fact that I designed all the blocks and that I entered it into a crafts show. I was working at a fabric shop, which was great for inspiration, and for spending all my wages. (I still have lots and lots of the fabric I bought while working there.) I spent all my downtime at work designing quilts on a little graph lined notebook. After I had worked there for a little over a year, my Bishop called me to serve a mission. I knew I would do it as soon as the words were out of his mouth. The Spirit hit me like a truck and I accepted.

I started right away on filling out the paperwork, but the going wasn't easy. I had some long running health issues and had to go to the doctor a lot. after a couple months I finished the paperwork and my Bishop mailed it in. Then the waiting started. I had a lot of nervous energy so I filled my evenings piecing a quilt. I would work six hours at a stretch, hardly stopping to eat or drink. A week after my papers were sent in, I received a phone call. The mission office wanted a second opinion on my health. (They have to deal with a lot of medical issues for missionaries and wanted to know if I could take the exhaustion of missionary work.) I would need to see another doctor. I made an appointment that day, but the second doctor couldn't fit me in for another month. So now I really had time and even more nervous energy.

I had never pieced a quilt design with anything more complicated than squares. Oh well, I was in for it now. The grid layout is traditional and I'm not sure if anyone else had used these exact star designs, but for me they were completely original and mine. My inspiration was Job 38:7 "When the morning stars sang together, and all the sons of God shouted for joy". I had been getting theme inspiration for quilt designs for some time from poetry and scripture. ( Although I've made only a very few of those quilts so far.)

I made each star design in two different color combinations and used every color on the wheel but green. 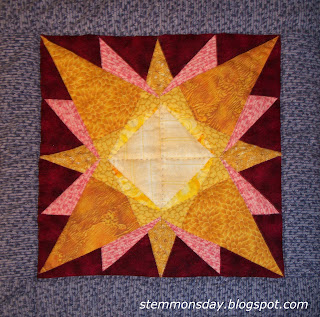 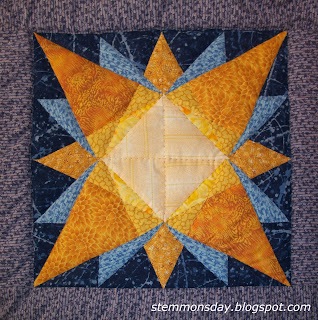 Each star design was used six times in the quilt, three for each color combo. 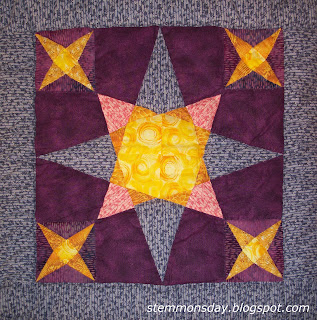 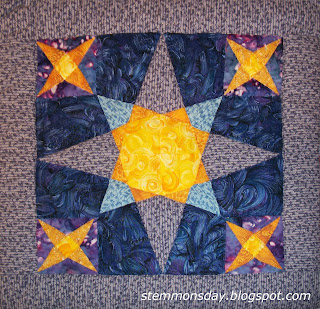 I really love how yellow and orange just pop against blue and purple. 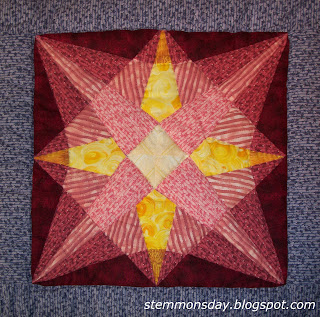 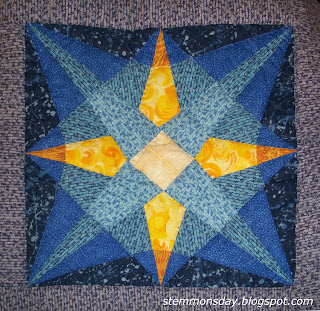 Then I grouped three of my shooting star design blocks around each corner for a total of twelve blocks. 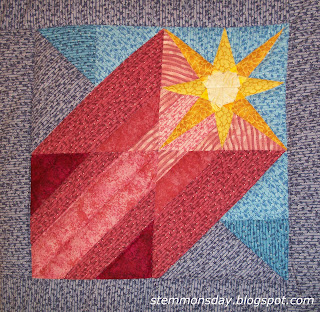 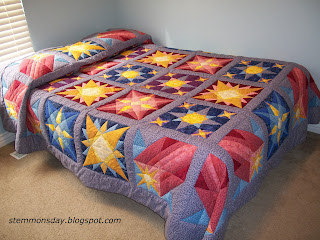 I finished the top of the quilt in very early June of 2000. A lady in my ward was in charge of the Bountiful Handcart Days Art and Craft competition and suggested I enter something. The due date was June 20th. I scrambled to finish the quilt in time. I did most of the quilting but Mom helped and called in the troops. (The sweet ladies from the Bountiful 12th Ward Relief Society and a few aunts and cousins.) We finished just in time to enter, well almost, I requested and was granted an extension since binding the quilt took about six hours longer than expected.

The quilt was submitted just after I received my call to serve as a missionary for the Church of Jesus Christ of Latter-Day Saints in the Indiana, Indianapolis Mission. I was to leave in six weeks. My youngest brother Jack and I were going to the Missionary Training Center just two weeks apart and we were both very excited and helped each other study and prepare. So when it came time to go to the awards ceremony for the show, my mind wasn't really on it. I was surprised to find out I had won the blue ribbon! Wow, that was a first. Later they announced the people's choice award, and I won that too! The show's run didn't end until after I left for the MTC so Mom picked up my quilt for me. It sat in storage for years after I got home since I still slept on a twin sized bed. I didn't make a really big quilt again for this reason until I helped with Jack's wedding quilt.

A million years later when Alan and I got married, I had a ready made quilt and Mom didn't have to hustle to finish one for me. We used it for the first few months of marriage until we got our tax refund and we bought a bed set with a king sized bed. Now my quilt is on the guest bed, at least until the bed gets kicked out for a crib.

Next time: The Mission Quilt.
Posted by Emily at 1:48 PM